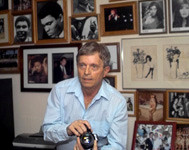 
David Gartner’s photography started in his cousin’s camera shop located on 46th street off 5th Avenue in 1959. It was mainly a professional photography shop where many of the professional photographers would come in to buy equipment. He was taught by the best such as Sam and Larry Shaw. One of their famous photos was of Marilyn Monroe from the movie “Seven Year Itch” and many famous photos. His work with Playboy started through the association of Playboy photographer Jerry Yulsman.

Official Playboy photograph, David Gartner, began working for Playboy in 1961 and continued for the next 30 years. During that time and after, his photographs have been numerous. They range from photos from the Playboy Club in New York, the Playboy Hotel and Resort in Great Gorge, New Jersey and the starting of the Playboy Hotel in Atlantic City to being the official photographer for Geraldo Rivera for 7 years to photographing the New York Nets and the New York Islanders and being given the title of honorary Deputy Sheriff of the Orange County Sheriff’s Task Force to
which he photographed the 150th Anniversary book and photographing many of their calls on the scene.

During the span of 30 years and more, the following are special credits given to him. This is just a partial list of them:

1. “Bob Dylan’s Greatest Hits” album cover
2. Kai Windings album cover for the album “Penny Lane”
3. Invented special lighting system used on Johnny Carson for Richard Harris’s song “MacAthur Park” and CBS special called “Spoon River Anthology” with
Jason Robards.
4. Use of the special lighting for Woody Allen
5. U.S. Army Reserve promotion video called “Charge of the Light Brigade” photographed in 1980 near the Playboy, Great Gorge stables which I owned.
6. Photographed the Harlem and Philadelphia riots in 1964-1965.
7. Photographed the painter, Leroy Neimen’s first showing at the Hammer Galleries on 57th Street in New York City.
8. Photographed the still photography, in 1995, for the “Backstreet Boys” first video.
9. Co-produced and photographed the stills of “The White Whore and the Bit Player” written by Tom Eyen for Playboy magazine.
10 .Photographed some of the stills for China Lee, Playboy centerfold Miss August 1964.
11. Recent work includes photography in published books for Elite Security (2009) and artitectural pictures in "A Souce of Community Pride-The Architecture of Sunny Isles Beach Hard Cover Book (6/15/2012) " Note: The book "A Source of Community Pride- The Architecture of Sunny Isles Beach" and its contents can only be purchased at the Government Center of the City of Sunny Isles Beach.

David Gartner had an incredible career photographing for Playboy and photographing numerous celebrities and sports figures and events. This site contains many of his best works.

On June 21, 2012, David was honored and received a proclamation from the City of Sunny Isles Beach naming June 21, 2012 as David Gartner Day.


If you would like any information about these photos or other photos that you may be curious that he might have as this site is still under construction, please contact David Gartner at: